You are here: Home / life of a business owner / Don’t forget your past careers – or that time my tree lopper was an ex-teacher

Because I work with lots of very early-stage small businesses (and tiny businesses!), lots of my clients are people who are doing something new in their working life. The psychologist who’s become a sketch artist, the accountant who’s become a life coach, the list goes on.

At some stage in my work with them, many of these clients ask me whether they should mention their past careers at all. They tend to want to hide them, but I am always telling them not to. When you’re planning your content for social media and blogging for your small business, then the stuff you’ve done in the past can be a great source of inspiration, a wonderful way to connect with your audience and yet another piece in the puzzle of proving that you’re good at what you’re do and people should pick you! 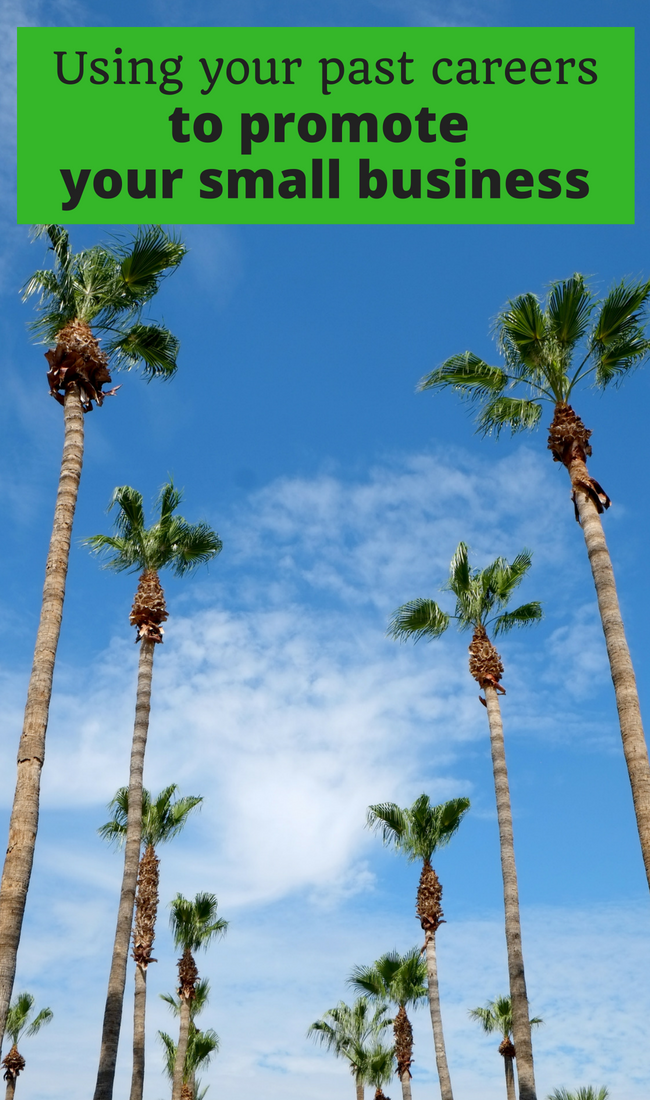 Why is my past career important in my new small business?

Honestly, it doesn’t matter to me if your old work is completely irrelevant to your new business – it still tells me something about you. What it tells me might be different to what it tells someone else, but it’s a big piece in shaping the puzzle.

One of my best buddies Kristy used to be an accountant. She gave that up and became a web designer. Having worked a lot with her, I know that the skills she brought from her accountancy career – including a love of spreadsheets and just generally being very organised and with good attention to detail – have made her an excellent web designer.  My sister is also an ex-accountant and now runs a florist business, and I’m sure that those skills have helped her make it successful. (Side note: one of my mastermind groups includes two accountants who are on track to becoming ex-accountants. Is there a message in that?!)

What if people think I’m crazy for changing careers?

These days it’s incredibly common to change careers. (Anecdotally, I believe it’s more common in Australia than perhaps other places. But certainly here, it’s something I come across constantly.) If you chose your first career path while you were in high school, and it’s a decade (or two, or three) later now, then it’s no surprise that the kind of work you want to do has changed. And there is also an endless number of new kinds of work to be done – my job certainly hadn’t been imagined when I was considering my university options while at high school.

Take me as an example, if you want. I was actually interested in being either a writer or a teacher when I was at school. “Unfortunately” I was a straight A student and I was encouraged to pick something else – which ended up being mathematics. Yep, I have a Bachelor of Science, mostly in maths, and my first “real” job was working at Edith Cowan University as a research assistant to a mathematics education professor. From then on I kept heading more towards education and further away from maths, leading to instructional design (planning out how to teach distance education courses and working with subject matter experts on it) until I decided to leave Perth for a few years and teach English overseas … while writing travel articles for magazines.

You can probably see in that summary all the skills I was building that have culminated in the work I do now. I added a Master of Education degree in adult education for good measure (because I’m nuts) and now running a consultancy business teaching people how to use social media and blogging to promote their business seems almost a logical result. Even though it happened basically by accident! But all those past experiences added something – and they’re worth telling people about.

How to include your past careers in your small business promotion

There are lots of times when it’s appropriate to bring up your past work – including:

And about that tree lopper

So what’s the tree lopper in the title all about?

The incident that inspired this post happened to me just this afternoon. I had a guy come round to quote on lopping some of my fast-growing trees. We chatted for a while and it turned out that a couple of decades back he was a primary school teacher, and then a high school maths teacher. Call me weird but at that moment I decided to hire him and not bother getting another quote (obviously his quote was reasonable, too). For whatever reason, knowing this about him told me a lot about his work ethic and people skills and, right or wrong, that helped me decide I liked him and wanted to hire him.

Previous Post: « Books I’ve read in 2018: Business and fun
Next Post: Why do you blog? Getting your blogging objectives clear! »