You are here: Home / Instagram / How hashtags make me happy (and how and why you can use hashtags)

What on earth is a hashtag?

If you’ve been wanting to ask me this question, you are definitely not alone.

Let’s start off with the basics. A hashtag is like a topic marker, a way to describe in a word or short phrase what the topic of your post is about. And the point of using a hashtag is that people can click on it and then find lots of other posts about the same topic (usually from all different people).

Hashtags have a few special qualities: 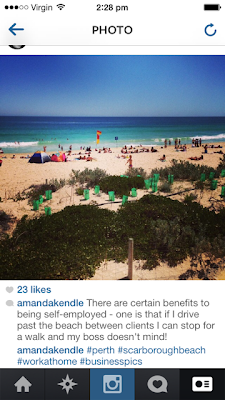 So then the next obvious question is why should we use hashtags? The main reason is so that more people can find the stuff we’re posting on social media. So, for example, if you post a photo on Instagram of the beach and use a few hashtags like #perth #scarboroughbeach #workathome (see, that’s throwing words together without spaces … you get used to it!) then you might get the attention of people who don’t actually follow you on Instagram. Someone who searches for Perth, for example, will see your image, and that might entice them to look around at your other pictures, and perhaps follow you. And it works the same way no matter which platform you’re talking about – although it’s fair to say that hashtags are more widely used on Twitter and Instagram at the moment, more than on other social media sites.
The other great time to use hashtags is so that people who know about the hashtag can use it to, so that you can all see what the others are doing. For example, at the Problogger conference last month, the hashtag was advertised as being #PBevent and this meant we all posted our thoughts and updates (and pictures of cake) using the #PBevent hashtag – and could then easily see what other attendees were saying about it, too. And of course with our #businesspics challenge on Instagram, our participants use the #businesspics hashtag and then anyone can tap on it and find all of the different posts from everyone.
Post by Amanda Kendle Consulting: Perth Social Media and Blogging.
I asked my Facebook page followers what their hashtag questions were, so let me answer them here:

Can you have your very own hashtag?
And related – how do you start a hashtag? Well, basically, a hashtag is public property. If you want to have a hashtag that gathers only your own posts together, then you want to make it pretty unique – #AmandaKendleConsulting would work here, #myhouse would not – but you can’t stop someone else from using it as well. To “start” a hashtag, you simply use it. Once you post a hashtag it just becomes one, and it’s clickable, even if it’s only that one post you’ve done that will pop up.

How do you decide what hashtag to use?
This gets easier with practice but there are basically three different ways I decide which hashtags to add:

You can also research conglomeration of posts from different platforms that have been hashtagged with the same thing at a service like Tagboard.

How many hashtags should you use?
I tend to use a maximum of three or four regardless of the platform (often less on Twitter, they take up too many characters!). I read a Mashable report about Instagram recently which showed more hashtags are better, up to about five hashtags, and then from then on you don’t get much benefit. And yes, to answer the person who asked me on Facebook, if you use twenty hashtags every time you may lose some followers, I know I for one get kind of annoyed when there is a mass of hashtags to navigate past.

Some other random bits and pieces about hashtags that might interest you:

Any more hashtag questions?
So, hopefully that’s answered some of the questions but I’m sure there will be more. Ask them in the comments below and I’ll take care of them. #ifican 🙂