You are here: Home / Blogging / Speaking at Media140’s DigitalMe conference: “Let’s blug – putting the “u” into blogging”

The Media140 DigitalMe day took place last Friday and I spoke in the afternoon – and I have to admit that before I showed up I was a little nervous about speaking at the Northbridge Piazza. I don’t know why it felt any different from a lecture theatre or conference hall but being outdoors with a giant screen above my head seemed to change things! Of course, once I arrived and discovered 99% of the audience were sitting on beanbags, I relaxed. The only bad thing was that as a presenter, I had to stand on stage rather than sit in a beanbag. They should look at that for next time round 😉 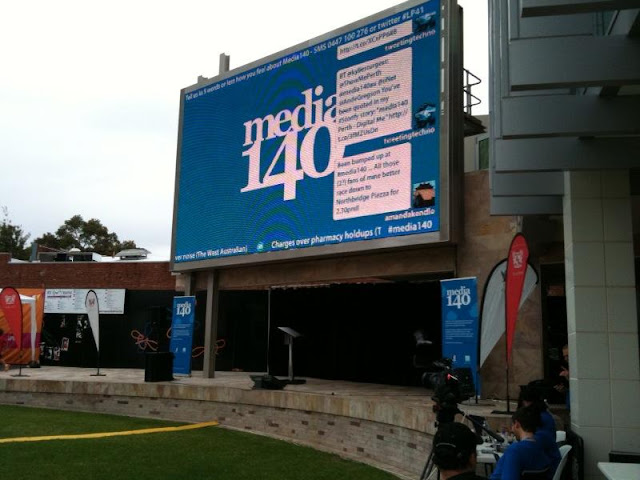 Anyway, I wanted to reiterate some of the main points I made in the presentation – all about putting voice into your blog. The title, to be accurate, was “Let’s blug: Putting the “u” into blogging”; I wanted to talk about how it’s not just enough to have a cool design and post regularly, but that also the way you write is still a really vital part of blogging. I’m a “words girl” at heart, and the words of a blog are important to me, and I want them to be important to other bloggers, too.
My minimalist slides below will give you an overview of what I spoke about … more details underneath.

Basically, the most important point that I hoped people would take away from seeing the examples I gave was that bloggers who people really take notice of and keep going back to are the ones that have figured out their blog’s voice – they’ve managed to inject their personality into their blog in such a way that readers feel they have a trusted relationship with the blogger, they want to keep reading them and they want to tell their friends about them. When I explain it as putting “you” into your blog, I certainly don’t mean that you need to divulge personal or private details, but that you need to write in such a way that readers feel they know you, and they can recognise your writing style, too. The examples I gave came from varied niches, and I also mentioned during the talk that the public-outdoor-venue G-rated nature of the conference meant I’d had to exclude a number of my favourite blogs! This is not to say that I’m usually a reader of Adult-Only blogs, but G-rating is a pretty big restriction. Some of the blogs that lay on my cutting room floor because of that are on this list – the first five are the ones I featured in my talk:

Hmm. I’m sure there are a stack more great blogs that I eliminated from my presentation for various reasons, but they fail to emerge for me right now, so I’ll come back and add to this list later. In the meantime, I summed up the day with a list of “secret rules” to get some voice into your blog, and I think they’re worth repeating:

Anyway, the presentation went well and generated a bit of talk on Twitter, and some of that’s below: 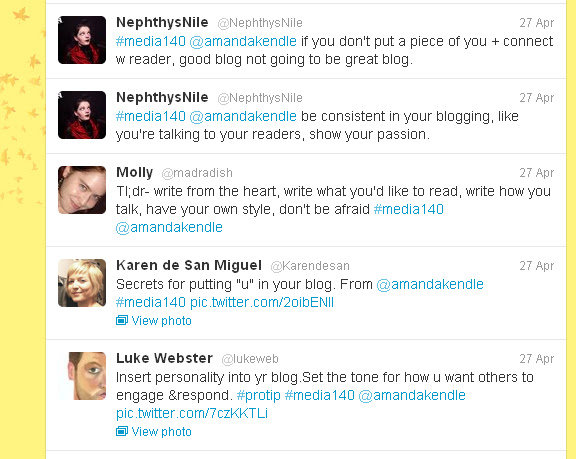 If you’ve got any examples of your own of blogs with great voice then I’d love to hear about them, so please leave the URLs in the comments below.

Previous Post: « Let’s blug: Putting the “u” in blogging at Media140’s DigitalMe conference
Next Post: How do delete a friend in Facebook … and will they know? »